Did you know that pulverized coal fired boiler systems produce around 38% of the world’s electrical energy?

These mechanical systems are the need of the era, for they reduce almost 97% of the total air pollutants emission. So, these pulverized coal fired boilers can produce electricity at net thermal cycle efficiencies ranging from 34 to 37%. This results in greater heating value and generates efficiencies greater than 42% without harming the planet. 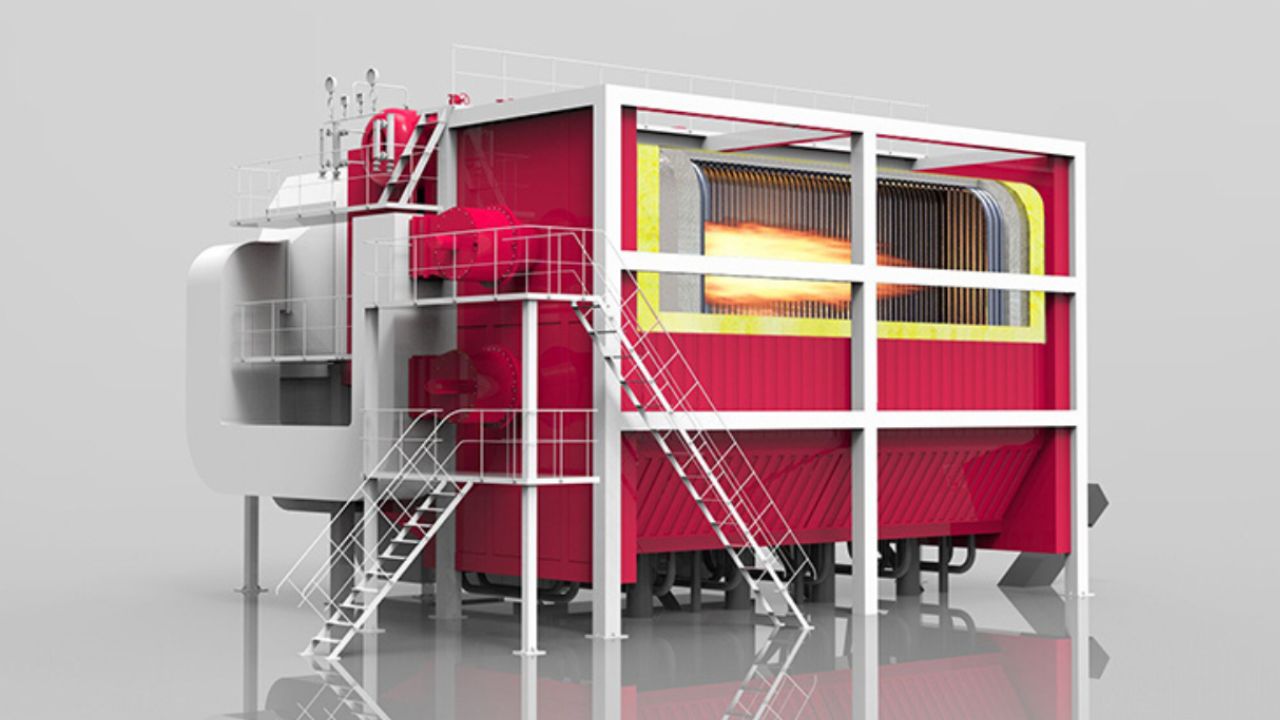 Such higher numbers indicate the supremacy of pulverized coal fired boilers for power generation in power plants. They offer better economic and ecological approaches by reducing fuel and pollution.

In the following article, you will learn about pulverized coal fired boilers and their role in electric production. We’ll also explore boiler designs and components, estimate costs associated with it, current trends, and future performance goals!

An industrial or utility boiler that burns pulverized coal blown into the firebox is a pulverized coal fired boiler. The term “pulverized coal” refers to coal broken down into little particles after being extracted as sedimentary rock. It is typically black and produces thermal energy.

The boiler’s furnace, or base area, houses the burners and firing system. In a conventional pulverized coal boiler, this is where combustion occurs.

In a standard lignite boiler design, the heat exchangers are configured in the following arrangement, following the flue gas stream: 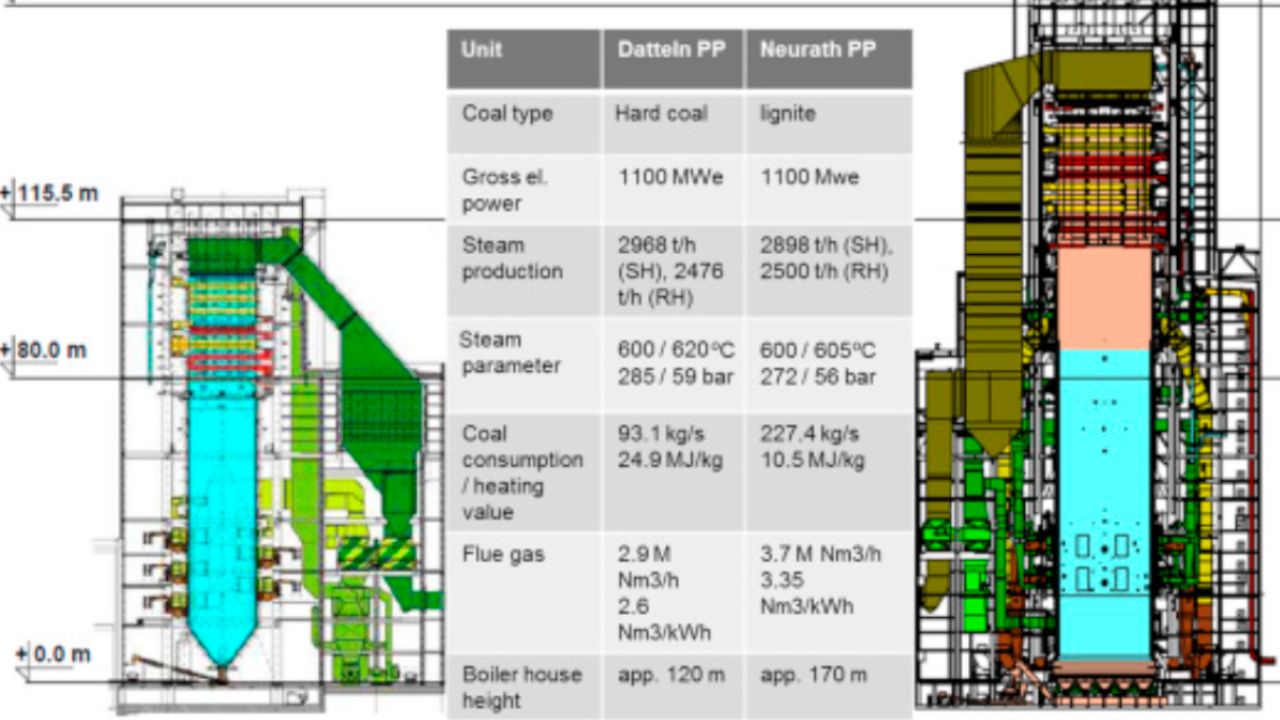 Temperature regulation is an important factor in pulverized coal fired boilers. To do that, a spray temperature controls the superheat temperature. Plus, gas proportioning dampers are located at the exit of the reheater and economizer sides to regulate the reheat temperature.

Hence, a reheat spray attemperator is utilized during transitory load and boiler breakdown settings. Thus, the spray volumes are kept to a minimum for optimal engine efficiency.

An EGU, or electric generating unit, is a static boiler or combustion turbine that drives a generator to produce electricity. EGUs have three main boiler types for utilizing and burning coal. A pulverized coal (PC) unit is the most effective type.

In a pulverized coal fired boiler, the coal is crushed via a pulverizer into small particles. This powdered coal is then burned in a burner. Most of the coal EGU technologies are PC units (pulverized coal units), which comprise around two-thirds of the units currently developed and used for electricity production. 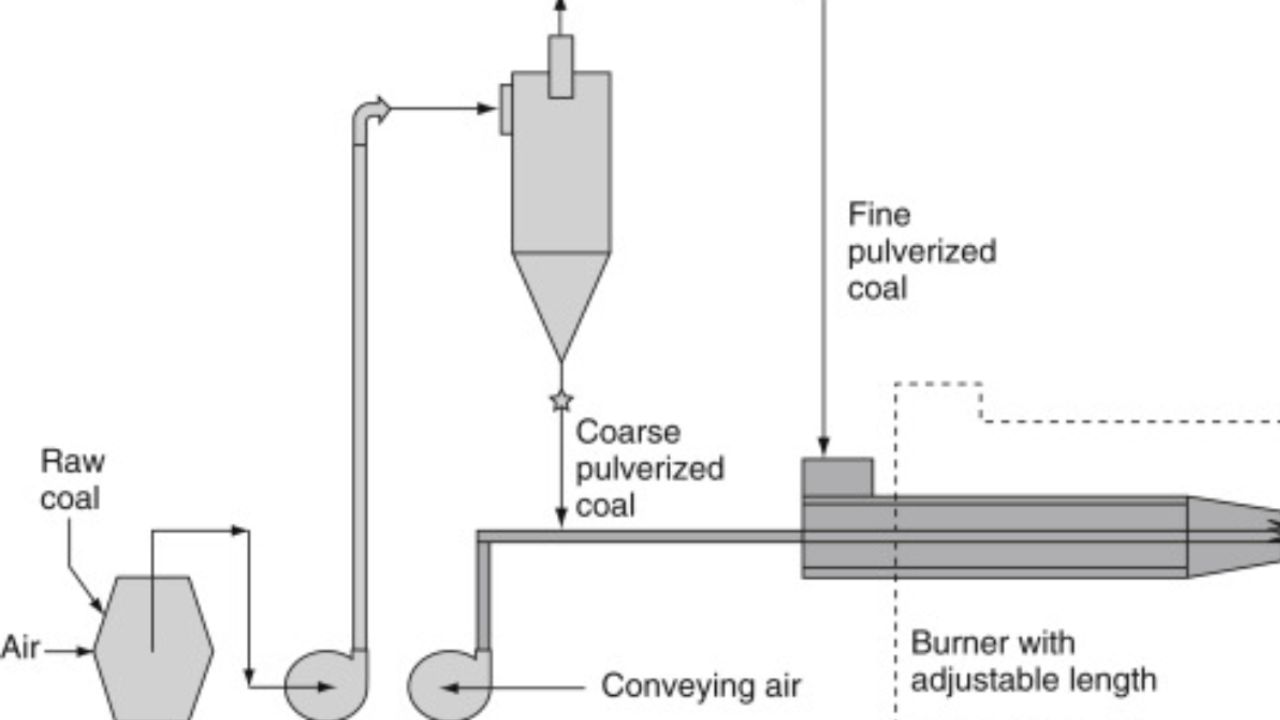 Several coal EGU components are used to generate electricity in power plants or other industries. It requires components that do not need huge, tailored parts or special metals to handle specific high steam temperatures and pressures.

Using components that contain these features also benefits the overall economy. It’s because the components used in these systems are available easily and can withstand extreme temperatures inside power plants. As a result, the supply chains and stakeholders are also less impacted by big variations in the marketplace for pulverized coal fired EGUs. In a nutshell, one of the significant material-handling devices for power plants is coal pulverizers.

Coal pulverizers are made primarily of steel and steel parts and are approximately 30 feet tall. Several autonomous pulverizers are generally installed for an EGU to meet its firing and performance criteria.

First, coal is placed into a pulverizer for PC units, which is pulverized into a fine powder to help combustion. The coal is mechanically crushed to the appropriate fineness. For that, bigger particles are reground, and moisture is removed from the coal. Doing this is necessary before burning coal powder in pulverizers using metal crushers, distinct compartments, and forced air.

Next, the coal is pushed through a burner for burning in PC units after it has been ground into a fine powder. As the mixture reaches the boiler, the burner ignites the coal, and airflow is under control. Each pulverizer generally has four to eight burners, with at least four pulverizers feeding a larger boiler. Significantly less smog-forming NOx may be produced by lowering the combustion temperatures and the oxygen concentration during the initial stages of coal burning.

Lastly, the mixture is transported to a coal fired steam boiler. Though boilers burn various fuels, they differ from those specifically designed for power plants. Coal fired electrical boilers are massive, integrated systems built with specialized materials and machinery. 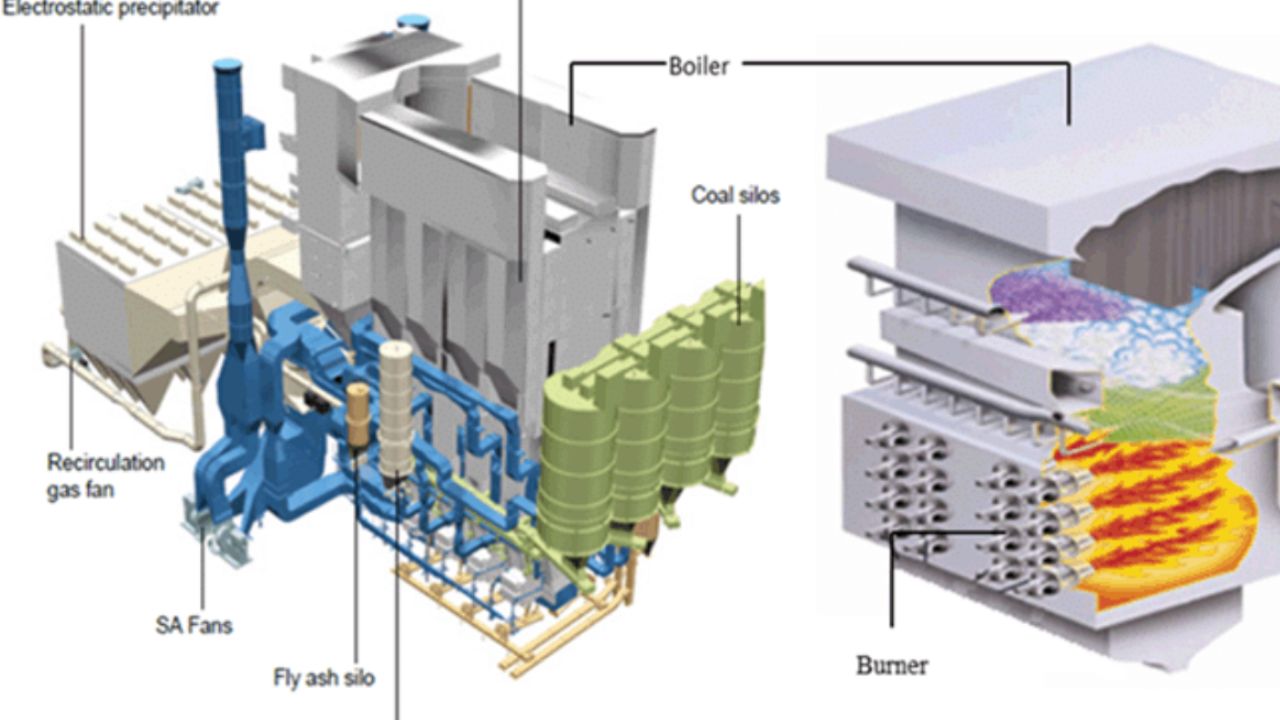 Plant owners can shift to lower-sulfur coal to cut down on the amount of SO2 from burning coal and thus meet environmental standards. Another way to reduce pollutants is using the SCR (Selective Catalytic Reduction) technology.

The SCR is a function of the pollution-control system in pulverized coal fired boilers. It is a component of the boiler system included in the exhaust. Ammonia is injected into the flue gas by the SCR or SNCR system to eliminate NOx.

The next step is when the pollutants are entirely eliminated from the mixture. After that, the residual flue gasses are released into the atmosphere through a smokestack or chimney. These chimneys are hundreds of feet high. They are built from reinforced concrete and lined with fiberglass-reinforced polymers, borosilicate blocks, or a nickel-metal alloy.

Furthermore, the chimney liners used in pulverized coal fired power plants are made using specialized materials, tailored for this particular application, and built to withstand corrosive conditions and high temperatures.

The following is an estimated coverage of pulverized coal fired boiler costs for power plants:

Throughout the globe, initiatives are being taken to create cutting-edge pulverized coal fired boiler systems. The goal is to fulfill future power production demands in a way that is both economically and ecologically acceptable.

Some of the most common aspects of this are increasing thermal efficiency, improving sustainability impact, growing prevalence, controlling initial capital costs, and lowering overall power costs.

Moreover, a subtle difference in operating cost can be used to obtain greater thermal efficiency, which offers various benefits. It might surprise you, but over 70% of a fossil fuel-fired power plant’s operating expenses are related to fuel consumption. 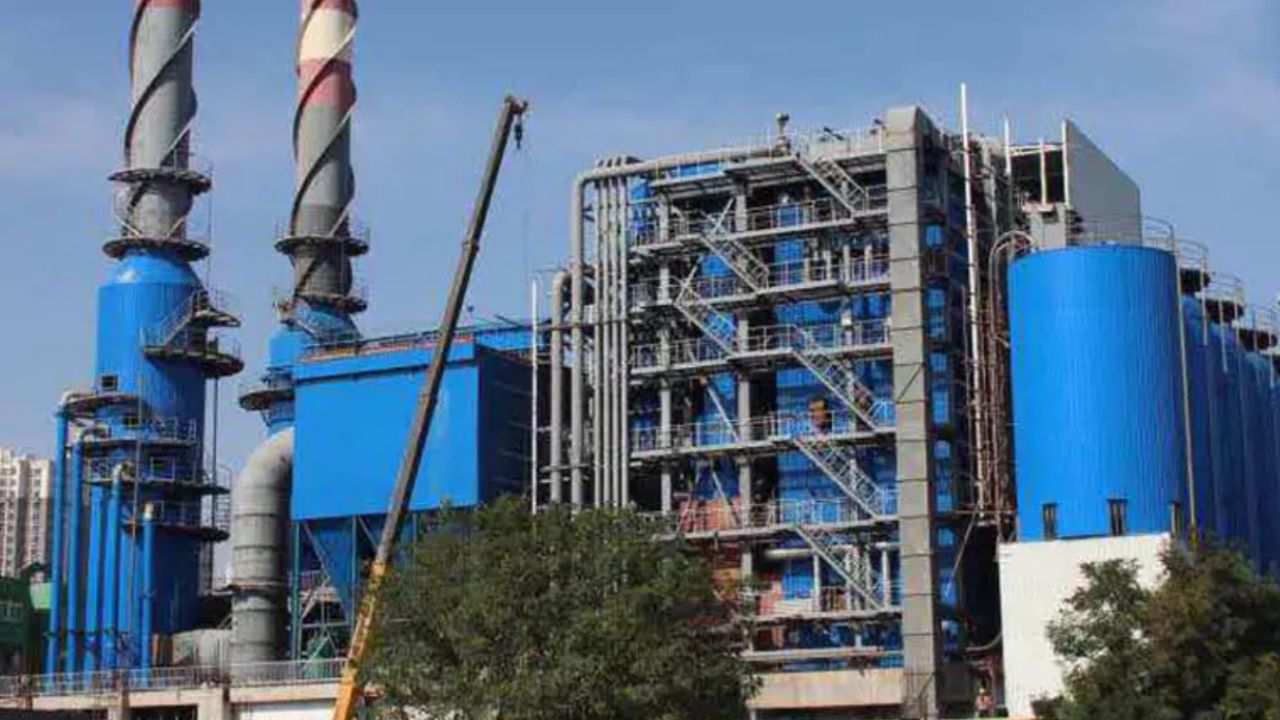 If this can be regulated, efficiency improvements may be able to offset the additional investment while also giving the plant a strategic advantage in a regulated global power market.

Thus, for every kilowatt-hour generated, less fuel usage will immediately lower the production of the primary air pollutants (SO2, NOx, and particulates). It makes efficiency improvements one of the most cost-effective ways to reduce carbon dioxide (CO2) emissions.

In addition, although exact performance indicators for every system differ, the following broad targets seem to be fairly common:

Indeed, pulverized coal fired boilers are an ideal solution for power plants. They are designed to withstand extreme temperatures and reduce significantly lesser pollution and emissions to achieve optimal performance.

What’s more, not just ecologically, but pulverized boiler systems are also excellent for the economy. When a significant number of resources is well-utilized with reduced waste, you can save money and expect higher industry annual revenue.

Scroll to Top
Send us your inquiry