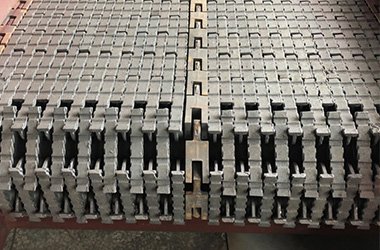 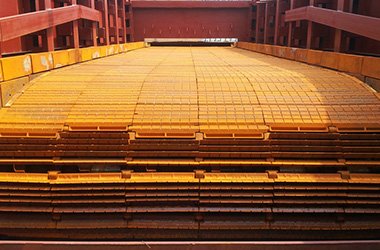 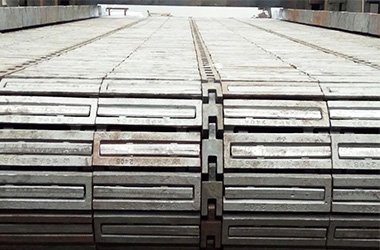 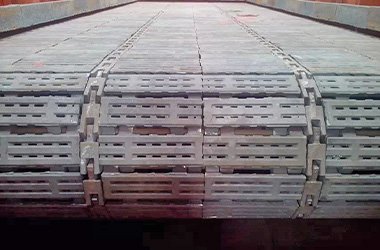 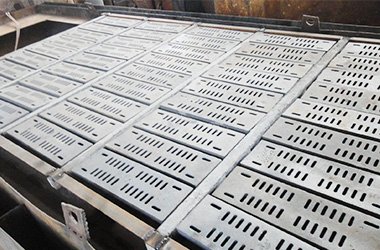 Yongxing Group specializes in the production of traveling grate stokers. It is a compact and technologically layer-burning device. We are a top-level manufacturer of steam boilers and boiler stokers. With our loads of experience in the boiler market, we provide the best, highly thermal efficient stokers as per your demands.

Plus, we have approved licenses for the manufacture and installation of all types of boilers. We have only one aim; satisfying our customers.

You can use it widely in large-scale chain grate boilers (with an evaporation capacity of 20~90t/h) and various heating and drying equipment. For example

It is suitable for burning bituminous coal, lignite, and peat. Biomass parcels such as bagasse, firewood, and rice husk.

The fuel you choose will decide the types of traveling grate stoker. When selecting them, be sure that they have a uniform size.

These feeding fuels are fully burning out in a travelling grate furnace. With the working of the gearbox, those burnt ash were discharged at the end travelling grate. Your system has a slag removal at the end. It will deliver the ash out methodically.

It works more automated and with high efficiency with boiler auxiliaries. Our design of the giant burning furnace, let your travelling grate stoker working is sufficient & Efficient.

If you buy our travelling grate stoker, you will get a whole system as follows:

So, if you need a high-quality traveling grate stoker, you should buy our stokers. For more information about the stokers, feel free to contact us. 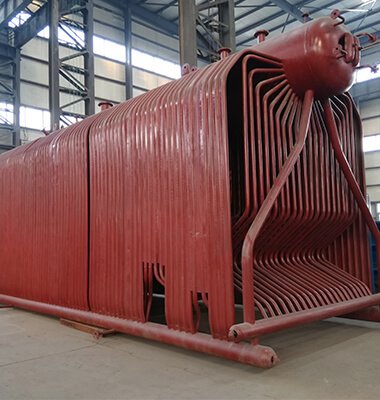 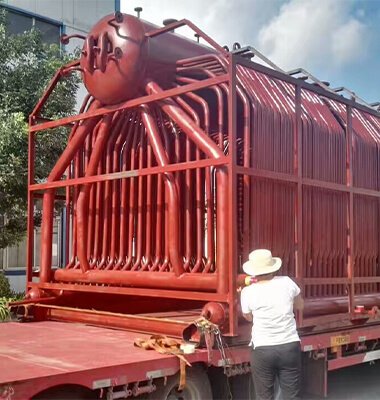 Welcome to visit our factory and check Travelling Grate Stoker

Our famous partner for your reference

Are the fuel costs for your boiler increasing day by day? Then, you must install a travelling grate stoker. This equipment will give you control over input fuel and greatly reduce fuel costs. With this grate stoker, you don’t need any labour to feed the fuel constantly. It will feed the boiler automatically for you.

The combustion in the travelling grate stoker happens on the grate. But what is a grate in a boiler? A grate is a chain that serves as the fuel bed for combustion. It enables the ventilation of air to aid in the burning. Let’s learn more about travelling grate and some other types of stokers:

Boiler Stoker: What Is It?

A boiler stoker is a boiler’s mechanical part that allows automatic fuel feeding. The fuel may be coal, biomass, or any other solid fuel. A stoker also includes a passage for air supply to help better combustion. Its technology helpful for saving fuel and money because it allows you to control fuel amount.

Advantages and Disadvantages of a Boiler Stoker

The following are the advantages of a boiler stoker:

The disadvantages of the boiler stoker are:

What Types Of Stokers Are Compatible With Coal Firing?

Several types of stokers make firing coal in the furnace easier. Some of them are listed below, along with their description:

The stoker pours the fuel into the grate, where it ignites. There is a passage in the traveling grate boiler that provides variable fresh air to aid in the process of combustion. You can control the speed of the chain, feeding rate, and spin speed by using the coal grate for effective combustion.

In this type of stoker, the stoker firing of the fuel on the combustion bed is continuous. It uses the mechanism of a travelling grate stoker and a vibrating stoker. This enables the stoker to handle load fluctuations efficiently. The combustion of fine particles happens in an unstable suspension mode. At the same time, the stoker spreads the large lumps of fuel evenly on the bed for burning. 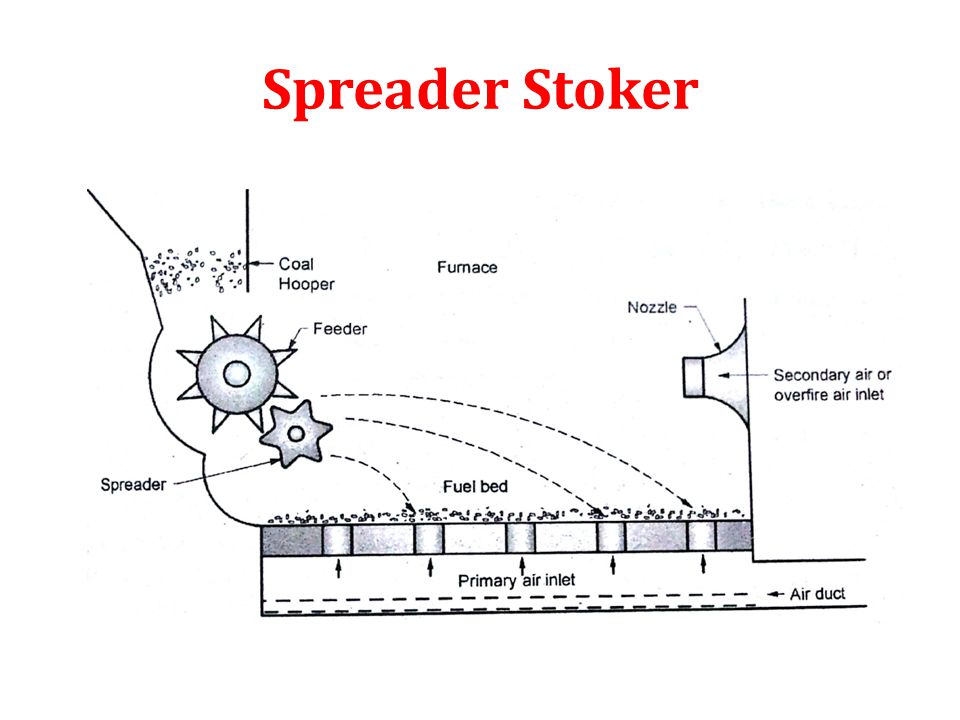 The vibrating stoker consists of a water-cooled matrix. The fuel, for instance, coal or biomass, moves on the grate. The grate vibrates at an amplitude of about 3mm for 5 seconds every 2 minutes. This vibrating motion of the grate scatters the solid fuel over the grate evenly and removes the ash as it moves forward to the other end. You can control the feed rate by controlling the period of the vibrations.

The vibrating travelling grate stoker is very efficient in the case of biomass fuels. It has a low carbon burnout rate as well. This type of stoker also has a cooling system that reduces the heat damage done to the grate. Moreover, it requires less maintenance as it has fewer moving parts. 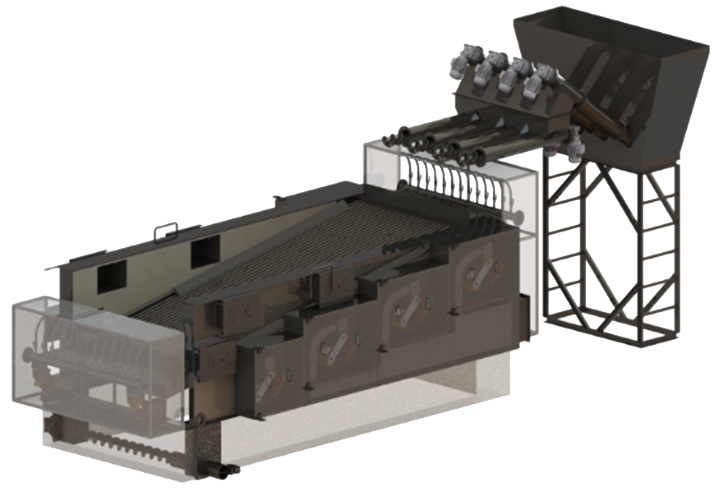 In an underfeed stoker, the fuel enters from beneath the grate using retorts. Then, the fuel moves upward with the help of a hopper in the furnace. The fresh air enters in the same direction as the fuel. It gets in contact with the coal, and the coal ignites and starts burning. 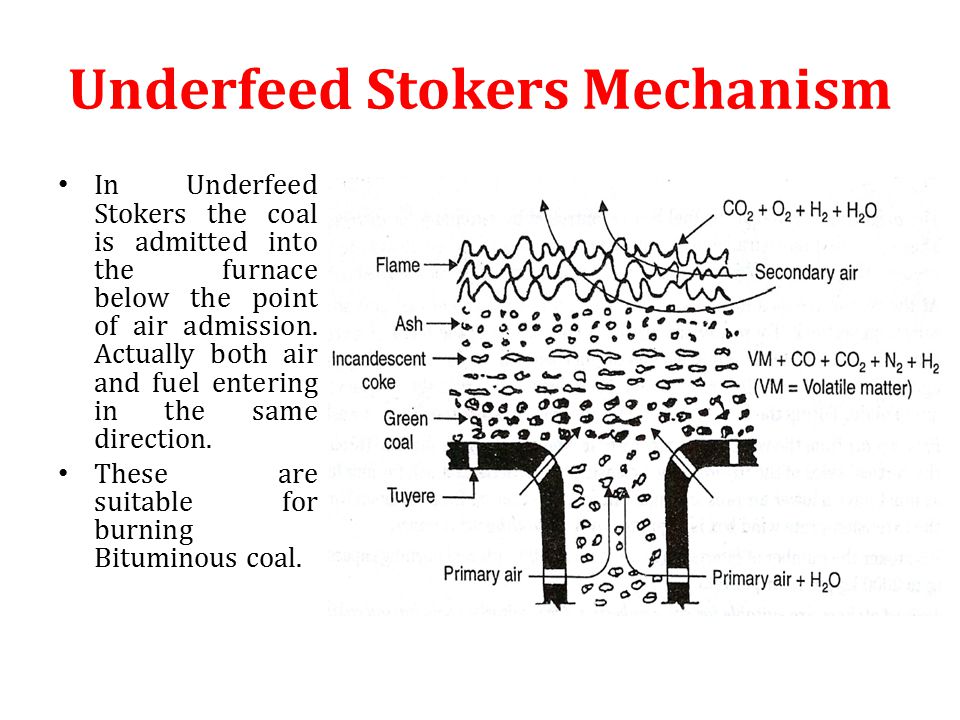 In this stoker type, the fuel and the combustion air enter the furnace from different directions. The fuel hopper pours the coal into the furnace from above. In contrast, the air enters from below the grate. The air absorbs the heat from the grate and gets preheated.

The travelling grate stoker and spreader stoker boiler use the mechanism of overfeeding stoker. This mechanism is not efficient for handling big lumps of fuel. But it can be quite helpful for variable loads.

How Does Travelling Grate Stoker Work?

In a travelling grate stoker, the fuel hopper puts the coal into the furnace on the grate on one end. As the grate moves horizontally, the fuel ignites and starts burning. You can control the bed thickness, feeding speed of the travelling grate stoker. You need to make sure that there are no big chunks of fuel on the grate. Otherwise, they will not burn completely and will go to waste.

As the grate feeds the fuel, the burning starts. The air supply needed for the combustion comes from below the grate. Smaller pieces burn in suspension. On the other hand, the larger particles burn in a high-temperature, fast-burning coal layer beneath the grate.

As the grate moves to the other end, residues from the combustion or ash form in the grate. The travelling grate stoker has an ash handling system that collects the ash at the end and passes it through an economizer. The economizer absorbs the remaining heat from the ash and uses it to heat the incoming air.

What Is The Working Principle Of Travelling Grate Boiler?

The first step is to feed fuel to the boiler. The hopper pours the fuel on the moving grate from above for an overfeed travelling grate stoker. The boiler allows you to control the amount of fuel feeding and the speed of the grate for getting the required amount of output.

When the fuel burns, it emits hot flue gases. The air provides the oxygen necessary for the combustion process. As a result, it generates by-product gases such as CO2, N2, and O2. Since the hot flue gases have a low density, they rise to the water tubes.

After reaching the water tubes, the hot flue gases transfer their heat to water. As a result, the water converts into steam. After heat transfer, the exhaust gases still hold some heat. So, we use economizers to absorb that heat and warm the feed water. It helps enhance the boiler’s thermal efficiency even more.

Also, due to a closed, controlled design, the boiler produces steam at high pressures and temperatures. As a result, we fulfill industries’ high temperature and pressure needs.

When the fuel burns entirely on the grate, its ashes are disposed of at the grate’s end. The system extracts the remaining heat from the ash and then disposes the ash or recycles it.

What Is Ash Handling System?

Fly ash is the ash that generates along with the flue gases. They are fine particles that suspend in the air along with other gases. The particles of the fly ash go upward with the flue gases. Filters and exhaust systems remove the fly ash using the process of electrostatics. The ash becomes charged with either positive or negative. Then the opposite charge attracts it outward and goes into fly ash hopper.

The bottom ash is the residue that collects on the grate where the fuel burns. They fall into the collector at the grate’s end. Afterwards, it cools down by submerging it in water. Next, it moves to the grinder. The grinder crushes the ash into small chunks that are later recycled.

Which Are The Best Grate Stokers?

Several types of boiler stokers are available in the market. An overfeed stoker is the best for variable loads but not suitable for large-size fuels. On the other hand, a vibrating stoker is self-cleaning. Although the combustion of underfeed stokers is smoke-free, they require more space and have a high initial cost.

But the travelling grate stoker is the best in the market that covers all the areas. They are low-cost and need less maintenance than other stokers. Plus, it is best for load fluctuations and offers variable combustion air. And they can clean themselves and remove waste automatically.

Chain grate stokers are highly efficient with automatic fuel loading. The installation costs are relatively less. So, if you are looking for a stoker, the travelling grate stoker is the best option for you. It will live up to your expectations giving you the required output.

In recent times, where boiler stokers are all over the industries, we manufacture top-quality stokers for your industries. Yongxing travelling grate stokers are well known for their high performance and excellent thermal efficiency. They can handle all kinds of solid fuels. It is an overfeed stoker that can handle variable amounts of input fuels.

Yongxing company stoker also has the minimum coal leakage. They help you save fuel and reduce fuel costs. Plus, our stokers are available at cheap rates with low installation costs. They have the best ash handling system installed that gets rid of the waste and makes them recycle-able. If you are looking for a stoker to reduce the costs, travelling grate stoker is the best one in the market.